Installation of the system involves the laying of cables directly on the non-conductive layer of waterproof isolation (bitumen membranes, roof PVC membranes and other materials); special unisolated wires, which during measurement, emit an electirical field over the waterproof membrane’s surface.
This leak detection system should be installed on new roof coverings. However, it can also easily be used on older roofs.

The system functions by conducting electricity through the humid layers of a roof and, using the electrical resistance of the waterproof membrane, is able to locate the leak.

On the surface of the waterproof membrane an electrical field is emitted.
Tight waterproof isolation is an effective barrier against the flow of electricity throughout the membrane from its top to bottom side.

Measurements are done after connection of the pulse generator to the cable loop installed directly on the surface of the roof membrane. During tests, on the measured area, a technician works, who thanks to connected with measuring rods portable meter, defines direction of the electricity’s flow.
Proper interpretation of measurements enables to locate even the smallest leakage.

What is more, sensitivity of the system enables to locate places which currently have not lost tigtness significantly but in the future, for example after a few cycles of freezing and defreezing can turn out as leaks. To conclude, system is also able to predict leaks 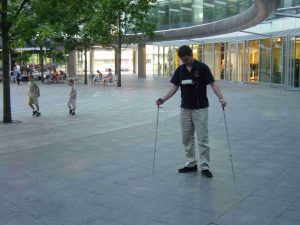 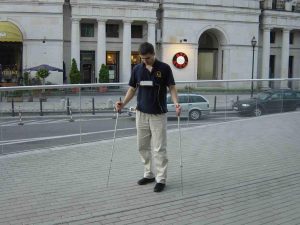 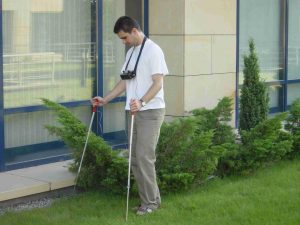 This leak detection system can be utilised practically on all kinds of flat roofs, green roofs and decks of underground garages constructed of, among other things, nonconductive materials such as bitumen membranes, roof PVC membranes, etc.

The configuration of a roof's various layers, in cross-section, is not important.
The system provides reliable results on roof coverings with a classic configuration of layers as well as on inverted roofs.

The system turns out to be an especially useful tool in case of roofs whose final layer which is made of difficult to remove materials such as stone or concrete slab pavement, gravel or soil with growing plants. In case of such roof systems it is worth to install the system permanently during construction works

Application of the system during roof works enables to monitor permanentny tightness of performed roof membrane without neccessity of application of long lasting and expensive water tests that sometimes cannot be done because of construction reasons or the shape of the roof.

Installed during roof works system, later, is a very useful tool for monitoring of tightness of roof isolation, for example before autumn-winter snow and rain falls.

System can be also applied on previously performed roof coverings and play similar monitoring role as above.

Costs of installation of the system are incomparably lower than financial and time outlays that would have to be spent for location of leak in case of traditional methods.

It also refers to removal of whole upper layers of roof covering and checkig each square meter of roof membrane.
Proper installation of the system and accurate check of the roof with use of the system can practically eliminate need of performance of long lasting and expensive water tests.

In the past there were known many cases when such tests had to be repeated a few times bacause of continous location of new leaks and further filling of the roof area with water after their removal.

Non destructive leak detection system provides very high effectivity.
Nevertheless it should be emphasised that the quality of measurements and general functioning of the system mainly depends on people performing measurements, their experience in interpretation of results and general roofing experience.

Taking into consideration over 15 years of experience in roofing at the range of system solutions, design and all other technological problems, as a partner, we are steadily cooperating with AB Mess und Trocknungtechnik GmbH sharing and exchanging our experiences

For nearly four years we are in the international network of companies (www.ild-world.com) performing similar scope of activities what guarantees us permanent access to latest solutions and permanent development of our experience.

Our experts with use of the non destructive leak detection system are able to locate even smallest puncture of waterproof membrane on your roof.

Thanks to that there is no neccessity of fencing and demolition of larger areas of terraces of public use buildings, residential quarters or slings of underground garrages in order to repair the waterproof membrane. The accurracy of measurements performed with use of the system is approximately 50 centimeters.

So location of the leak can be done during normal exploitation of the terrace and the repair can be performed in a short time, for example during one evening, after closure of the terrace for working in the building people or customers. 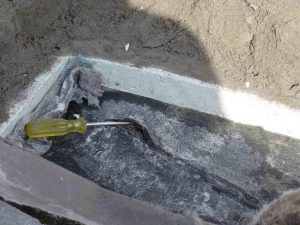 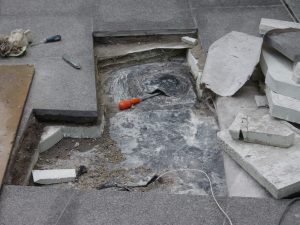 Below you will find an information folder fully presenting a non-destructive leak detection system.
We invite you to read its content

Any cookies that may not be particularly necessary for the website to function and is used specifically to collect user personal data via analytics, ads, other embedded contents are termed as non-necessary cookies. It is mandatory to procure user consent prior to running these cookies on your website.